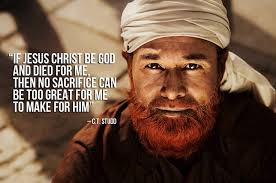 1 Corinthians 9:16,   For though I preach the gospel, I have nothing to glory of: for necessity is laid upon me; yea, woe is unto me, if I preach not the gospel!

Will continue my thoughts on “Dangerous Prayers” with the next post, but with the memorial service of my father-n-law today, and hearing two really good quotes during the service …

“He lived his life for the Savior.”

“We are here today to celebrate a life well lived for Christ.”

I thought I would share the following with you.

Charles T. Studd is one of the most notable missionaries of all-time. He was a servant of Christ who faithfully served His Saviour in China, India, and Africa. Prior to leaving for the mission field, he was a well-known and very wealthy athlete in England. But he gave it all up-the prosperity and the prestige for God’s purpose for his life on the mission field.

It was Studd who penned the words, “If Jesus Christ be God and died for me, then no sacrifice could be too great for me to make for him” and “Some wish to live within the sound of Church or Chapel bell; I want to run a Rescue Shop within a yard of hell.” He’s also the one who penned the well-known words, “Only one life, twill soon be past. Only what’s done for Christ will last.”

What was C.T. Studd’s reason for giving and going? Studd, you remember, gave away a fortune—$145,000. He could have lived at home in great luxury, but he chose rather to give away all that he had and go to China as a missionary. Why? Strange as it may seem, it was the statement of an atheist that started him on his way. It so gripped him when he read it that he felt he must leave all and follow Jesus Christ. Here it is:

Did I firmly believe, as millions say they do, that the knowledge and practice of religion in this life influences destiny in another, religion would mean to me everything. I would cast away earthly enjoyment as dross, earthly cares as follies, and earthly thoughts and feelings as vanity. Religion would be my first waking thought, and my last image before sleep sank me into unconsciousness. I would labor in its cause alone. I would take thought for the morrow of Eternity only. I would esteem one soul gained for Heaven worth a life of suffering. Earthly consequences should never stay my hand, nor seal my lips. Earth, its joys and grief’s, would occupy no moment in my thoughts. I would strive to look upon Eternity alone, and on the immortal Souls around me, soon to be everlastingly happy or everlastingly miserable. I would go forth to the world and preach to it in season and out of season, and my text would be, ‘What shall it profit a man, if he shall gain the whole world and lose his own soul?’”

Nothing like falling under conviction after reading what an atheist had to say.