Oswald J. Smith was a man who had a real heart for missions. He had tried to go to the mission field, but no Missions’ Board would accept him because of his health. God used him and his church to give millions of dollars to missions. I believe his church gave 90 percent of their income towards missions.  And, of course, he was the man who inspired thousands of churches with the “Faith Promise” concept of giving to missions. In the first chapter of his book, The Challenge of Missions, Smith wrote an allegory, which he called “Satan’s Defeat.” Below, you will find part one of his challenging words:

“WELL, what news?” inquired Satan, looking up with an expression of inquiry on his face. “Great! the very best!” responded the Prince of Alaska, who had just entered. “Have any of the Eskimos heard yet?” questioned the eager leader, his eyes fastened on the fallen angel. “Not one!” answered the Prince, bowing low. “No, indeed, not a single individual. I have seen to that,” he continued, as though gloating over a recent victory. “Any attempts?” questioned his lord in a tone of authority. “Have any attempted to get in?” “That they have, but their efforts were foiled before they got a word of the language!” replied the Prince, a note of triumph in his voice. “How? Tell me. How came it?”

Satan was all attention n

ow. “Why,” began the Prince, “I was roaming back and forth within my domains, having penetrated far into the Arctic Circle in order to visit one of the most isolated tribes, when suddenly I was amazed to hear that two missionaries were on their way from across the water, that they had landed, and with their dog sleighs were already well into the heart of my kingdom, Alaska, making for a large tribe of Eskimo just within the Arctic Circle.” “Yes, and what didst thou do?” broke in Satan, impatient to hear the climax. “First of all, I gathered together the hosts of darkness under my command and held a council. Many suggestions were made. Finally it was agreed that the easiest way was to freeze them to death. “Finding that they were that day leaving for the distant tribe and that it would in all probability take them a full month to cross the frozen ice fields that intervened, we at once began operations. “With hearts burdened to make the message known, they started. Manfully they ‘mushed’ along. But when about a week out, suddenly one day their food sleigh ran over thin ice, which broke beneath its weight, and was almost immediately lost. “Weary and tired, they bravely plodded on only to realize that they were in a helpless condition, and still over three weeks from their destination. They were new to the great Northland, and were no match for it. “Finally, when they were out of food, tired and weary in body, and almost ready to give up, I gave the word of command, and in a short time the wind began to blow a hurricane, the snow came down in a blinding blizzard, and before morning, thanks to the fact that thou, O my lord, art the Prince of the Powers of the Air, they were cold and stiff in death.” “Excellent! Splendid! Thou didst serve me well,” commented the fallen cherub, with a gratified expression on his once beautiful countenance.

“And what hast thou to report?” he continued, turning to the Prince of Tibet, who had listened with evident satisfaction to the conversation. “I, too, have a story that will fill Your Majesty with delight,” responded the one addressed. “Ha! Has an attempt been made to invade thy kingdom as well, my Prince?” inquired Satan with growing interest. “That there has,” responded the Prince. “How? Tell me about it,” commanded Satan, instantly on the alert. “I was attending to my duties in the heart of Tibet,” explained the Prince, “when news reached me of a Society organized specially to get the Gospel to my kingdom. Thou mayest well know, my lord, that I was at once on the alert. I called my forces together to discuss the whole situation, and we presently agreed on a plan that promised success. “With great determination, two men sent out by the Society travelled across China and boldly passing over the border, entered the Forbidden Land. We allowed them to advance about three days’ journey, and then, just as it was growing dark, two savage dogs, such as are found all over the country, sprang upon them. Most desperately they fought for their lives, but finally one was dragged down and killed. The other, protected by invisible forces which we were unable to overcome, somehow escaped.” “Escaped!” cried Satan, making a hideous gesture. “Escaped! Did he get the message to them?” “No, my lord,” responded the Prince of Tibet, in a tone of assurance. “He had no chance. Before he could learn a word of the language, our hosts had him set upon by the natives themselves. He was quickly tried and sentenced. Oh, it was a scene that would have filled Your Majesty with delight. They sewed him up in a wet yak skin and put him out in the sun to bake. For three days he remained there, his bones slowly cracking as the skin shrank, until finally life ceased.” The room had been filling fast while the Prince of Tibet was speaking, and at the conclusion of his report a great cheer rose from the entire assembly, while all bowed to the majestic figure of Satan, still beautiful, in spite of the ravages of sin.

But a moment later, the cheering subsided, hushed by a wave of Satan’s hand. “And what hast thou to report?” he asked, turning to another fallen angel. “Art thou still master of Afghanistan, my Prince?” “That I am, Your Majesty,” replied the one addressed, “though were it not for my faithful followers, I doubt if it would be so.” “Ah! Has an attempt been made on thy domains also?” exclaimed Satan in a loud voice. “Yes, my lord,” responded the Prince. “But listen and I will tell all.” With a wave of his hand for silence, he began: “We watched their advance; there were four of them—all zealous to make Him known. “Thou knowest, my lord, of the sign that meets the traveller just inside the border of my kingdom. It reads as follows: “It is absolutely forbidden to cross this border into Afghanistan territory. “Well, they knelt down around it and prayed, but, in spite of this, our valiant forces prevailed. Fifty feet from the sign, on a pile or rocks, sits an Afghan guard, rifle in hand. After praying, the little company stepped boldly over the border and entered the Forbidden Land. The guard allowed them to advance twenty paces, then, like a flash of lightning, three shots were fired and three of the company lay on the ground, two of them dead, the third wounded. His comrade hastily dragged the wounded man back to the border, where, after a short sickness, he died, while he himself lost heart and fled from the country.” Prolonged cheering followed this recital, and great joy filled every heart, Satan’s most of all, for was he not still in possession of the Closed Lands, and had he not triumphed on every field? The message, thanks to his countless hordes, had still been kept out, nor had the dreaded Name yet been heard. “Wilt thou not tell us, oh, thou Mighty One, why thou art so anxious to keep the knowledge from these our empires? Knowest thou not that the kingdoms of the Prince of India, the Prince of China and His Royal Highness the Prince of Africa, are being invaded by strong forces, and that men are turning to Christ ever day?” “Ah, yes, full well I know. 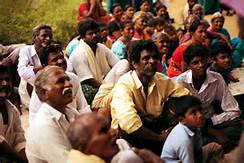 But listen all, and I will explain why I am so jealous for the Closed Lands,” answered Satan, while all bent forward to hear. “There are several prophecies, perhaps best summed up in this one,” he began, “which reads as follows: ‘This Gospel of the kingdom shall be preached in all the world for a witness unto all nations; and then shall the end come.’ Now it is very clear,” he continued in a low tone, “that God is visiting the Gentiles, ‘to take out of them a people for His name,’ and ‘after this,’ He says, ‘I will return’; and the Great Commission implies that disciples are to be made from among all nations. “Now,” he exclaimed with indignation, “Jesus Christ cannot return to reign until every nation has heard the Good News, for it reads, ‘I beheld a great multitude, which no man could number, of all nations, and kindreds, and people, and tongues’ (Rev. 7:9).

Hence, it matters not how many missionaries are sent to countries already evangelized, nor how many converts are made, for not until the message of the Gospel has been proclaimed in Alaska, Tibet, Afghanistan and our other domains, where it has never yet been heard, will He return to reign.” “Then,” broke in the Prince of Nepal, “if we can keep every messenger out of the Closed Lands, we can prevent His coming to reign on the earth and so frustrate the purposes of the Most High.”

“And that we will,” cried the proud Prince of Cambodia. “Only the other day,” he continued, “a missionary himself wrote saying, ‘At this time we do not know of a single Cambodian who has a saving knowledge of our Saviour Jesus Christ.’ We will see to it, Your Majesty, that not one escapes.” “That is good,” said Satan. “Let us be even more vigilant and frustrate every attempt to enter the Closed Lands.”

As the great plan dawned upon them, they shouted with glee, and hurried back to their empires, more determined than ever to prevent the escape of a single soul.

There was an error retrieving images from Instagram. An attempt will be remade in a few minutes.