Acts 7:30-36, And when forty years were expired, there appeared to him in the wilderness of mount Sina an angel of the Lord in a flame of fire in a bush. 31  When Moses saw it, he wondered at the sight: and as he drew near to behold it, the voice of the Lord came unto him, 32  Saying, I am the God of thy fathers, the God of Abraham, and the God of Isaac, and the God of Jacob. Then Moses trembled, and durst not behold. 33  Then said the Lord to him, Put off thy shoes from thy feet: for the place where thou standest is holy ground. 34  I have seen, I have seen the affliction of my people which is in Egypt, and I have heard their groaning, and am come down to deliver them. And now come, I will send thee into Egypt. 35  This Moses whom they refused, saying, Who made thee a ruler and a judge? the same did God send to be a ruler and a deliverer by the hand of the angel which appeared to him in the bush. 36  He brought them out, after that he had shewed wonders and signs in the land of Egypt, and in the Red sea, and in the wilderness forty years.

Exodus 3:1-4, Now Moses kept the flock of Jethro his father in law, the priest of Midian: and he led the flock to the backside of the desert, and came to the mountain of God, even to Horeb. 2  And the angel of the LORD appeared unto him in a flame of fire out of the midst of a bush: and he looked, and, behold, the bush burned with fire, and the bush was not consumed. 3  And Moses said, I will now turn aside, and see this great sight, why the bush is not burnt. 4  And when the LORD saw that he turned aside to see, God called unto him out of the midst of the bush, and said, Moses, Moses. And he said, Here am I.

After forty years of living a life of insignificance in the eyes of man, as a shepherd in the wilderness, in just a moment’s time, everything changed for Moses. He had what we refer to as a “burning bush” experience. What is often forgotten, as we read either the account in Exodus, or the account in Acts, is that Moses had to “turn aside,” and because He did, God called Moses for the great task at hand.

Still, I’ve come to believe that hearing the quiet whisper of the transcendent God is one of the most extraordinary privileges in all of life— and potentially the most transforming dynamic in the Christian faith. When people hear from heaven, they are rarely the same again. When the sovereign God chooses to communicate with someone— whether eight, eighteen or eighty years old— that person’s world is rocked. … If you lower the ambient noise of your life and listen expectantly for those whispers of God, your ears will hear them. And when you follow their lead, your world will be rocked. ...God’s whispers be dangerous things. They can come with huge price tags. … Therefore it should come as no surprise that a certain number of whispers that come our way will drive us to our knees and stretch our faith like nothing else can.

Is God whispering to you today? What is He saying? What are you going to do about it? 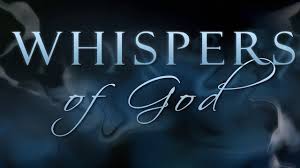 The promptings of the Holy Spirit can sometimes seem pretty pointless, but rest assured, God is working His plan. And if you “turn aside,” He will take you places you never could have imagined going by paths you never knew existed.

Maybe if we had more personal wilderness and “burning bush” experiences, we might see more great deliverances “around the corner” and “around the world.”‬