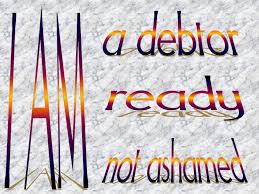 Romans 1:13-16, Now I would not have you ignorant, brethren, that oftentimes I purposed to come unto you, (but was let hitherto,) that I might have some fruit among you also, even as among other Gentiles. I am debtor both to the Greeks, and to the Barbarians; both to the wise, and to the unwise. So, as much as in me is, I am ready to preach the gospel to you that are at Rome also. For I am not ashamed of the gospel of Christ: for it is the power of God unto salvation to every one that believeth; to the Jew first, and also to the Greek.

Unlike most of us, the apostle Paul was willing to leave his comfort zone (Jerusalem, Judah, and the Jewish people) to go to the uncivilized pagans of his day.

Unlike most of us, Paul willingly surrendered, served, and sacrificed much for Christ and the cause of Christ among the “Unreached” peoples of his day.  What inspired him to do so?

Paul clearly understood that he was a DEBTOR to do so. He owed a DEBT to his glorious Lord and Saviour, as well as a DEBT to those with little hope and little help!

Paul was CALLED and SEPARATED BY GOD, and he SURRENDERED TO GOD’S PURPOSE for his life. How about us today? God’s calling and His separating us unto a work accomplishes very little, if we don’t SURRENDER!

Do we see ourselves as DEBTORS? And, if so, what are we doing about it?