2 Samuel 23:8-21, These be the names of the mighty men whom David had: The Tachmonite that sat in the seat, chief among the captains; the same was Adino the Eznite: he lift up his spear against eight hundred, whom he slew at one time. 9 And after him was Eleazar the son of Dodo the Ahohite, one of the three mighty men with David, when they defied the Philistines that were there gathered together to battle, and the men of Israel were gone away: 10 He arose, and smote the Philistines until his hand was weary, and his hand clave unto the sword: and the LORD wrought a great victory that day; and the people returned after him only to spoil. 11 And after him was Shammah the son of Agee the Hararite. And the Philistines were gathered together into a troop, where was a piece of ground full of lentiles: and the people fled from the Philistines. 12 But he stood in the midst of the ground, and defended it, and slew the Philistines: and the LORD wrought a great victory. 13 And three of the thirty chief went down, and came to David in the harvest time unto the cave of Adullam: and the troop of the Philistines pitched in the valley of Rephaim. 14 And David was then in an hold, and the garrison of the Philistines was then in Bethlehem. 15 And David longed, and said, Oh that one would give me drink of the water of the well of Bethlehem, which is by the gate! 16 And the three mighty men brake through the host of the Philistines, and drew water out of the well of Bethlehem, that was by the gate, and took it, and brought it to David: nevertheless he would not drink thereof, but poured it out unto the LORD. 17 And he said, Be it far from me, O LORD, that I should do this: [is not this] the blood of the men that went in jeopardy of their lives? therefore he would not drink it. These things did these three mighty men. 18 And Abishai, the brother of Joab, the son of Zeruiah, was chief among three. And he lifted up his spear against three hundred, [and] slew [them], and had the name among three. 19 Was he not most honourable of three? therefore he was their captain: howbeit he attained not unto the [first] three. 20 And Benaiah the son of Jehoiada, the son of a valiant man, of Kabzeel, who had done many acts, he slew two lionlike men of Moab: he went down also and slew a lion in the midst of a pit in time of snow: 21 And he slew an Egyptian, a goodly man: and the Egyptian had a spear in his hand; but he went down to him with a staff, and plucked the spear out of the Egyptian’s hand, and slew him with his own spear. 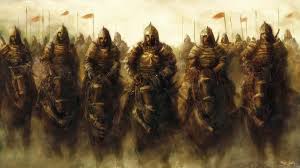 When we read about “David’s Mighty Men” in 2 Samuel and 1 Chronicles we can’t help but be struck with awe. God used these men – this “band of brothers,” if you will – to do some mighty exploits despite overwhelming odds.

What made “David’s Mighty Men” such mighty men, capable of such mighty deeds, and against such overwhelming odds (2 Samuel 23:8-23)?

Was it not their willingness to surrender all and risk everything in order to “gather themselves unto him,”  and make him the captain of their lives?

And yet, as Christians today, we have One far greater than David—His Name is Jesus. Should we not be willing to do the same for our Lord? Should we not forsake all others, gather ourselves unto Him, and acknowledge Him as the Pre-eminent One in our lives and ministries?

In my opinion, there is something else that enabled these men-who according to 1 Samuel 22, didn’t really have a whole lot to offer-to become mighty men who did mighty exploits for the kingdom of God.

Their ability to see a God-given opportunity and seize it!

I love the words of author Mark Batterson along these lines:

“When I look in the rearview mirror, I realize that the biggest risks were the greatest opportunities… Spiritual maturity is seeing and seizing God-ordained opportunities. Think of every opportunity as God’s gift to you. What you do with those opportunities is your gift to God. I’m absolutely convinced that our greatest regrets in life will be missed opportunities.”

Let’s all rise up, gather ourselves unto our King, the Lord Jesus, surrendering and risking all for Christ and the cause of Christ, regardless of present circumstances and potential consequences, and watch what God will do.

O Lord, raise up some “mighty” men and women today, willing to risk it all for the cause of Christ!