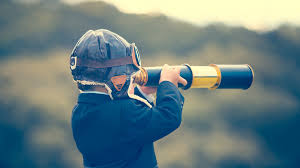 Pro 29:18, Where there is no vision, the people perish: but he that keepeth the law, happy is he.

Neh 1:1-4, The words of Nehemiah the son of Hachaliah. And it came to pass in the month Chisleu, in the twentieth year, as I was in Shushan the palace, 2 That Hanani, one of my brethren, came, he and certain men of Judah; and I asked them concerning the Jews that had escaped, which were left of the captivity, and concerning Jerusalem. 3 And they said unto me, The remnant that are left of the captivity there in the province are in great affliction and reproach: the wall of Jerusalem also is broken down, and the gates thereof are burned with fire. 4 And it came to pass, when I heard these words, that I sat down and wept, and mourned certain days, and fasted, and prayed before the God of heaven,

I absolutely love the Book of Nehemiah. It’s a book that reminds us what God can do with one man (or woman) who has a vision, or a burden from God. Nehemiah accomplished a GREAT WORK because he had a GREAT VISION that began with a burden for Jerusalem.

In the midst of his comfort as a cupbearer for the king, his heart was broken over that which broke the heart of his heavenly King. Far too many of us have become comfortable, complacent, and in some cases, carnal.

If that’s the case in your life, it’s time for a change. A radical change!

In our last post we mentioned how important it was to have a vision birthed in heaven and found in God’s word, and how easy it is for the people of God to lose the vision or the burden they once had. As one author noted:

“Vision leaks, even out of the best of our people. The demands of everyday life gradually cause their minds to grow fuzzy, their commitment to wane, and their hearts to grow cold.”

When you think about it, there are very few things that are affecting our personal lives, our Christian homes and our churches, our communities and our country, as is a LACK OF VISION from above, and from God’s holy word. And sadly, because we are lacking a vision birthed from above, many are perishing. As William Booth once said:

“For far too long the Body of Christ has been asleep on the job while the harvest rots in the fields. The enemy has blinded our eyes to the desperate needs around us and caused us to focus on temporal things rather than the eternal values we have been called to live by.”

Far too many of God’s people are sleeping and have been blinded by our enemy and have lost their vision of the Person of God and the purpose of God for their lives, and thus, become unfaithful in their walk with and work for Christ. As one author noted:

“Find me a believer who is no longer faithful to the cause of Christ, and I will show you a man or woman who has no vision from God, no sense of divine destiny. Such people have either lost it or never had it. Visionary believers are marked by their intense faithfulness to their vision and to their Savior.”

Speaking of vision, I love the following definitions:

“Vision is a clear mental picture of what could be, fueled by the conviction that it should be. Vision is a preferred future. A destination. Vision always stands in contrast to the world as it is. Vision demands change. It implies movement. But a vision requires someone to champion the cause. For a vision to become a reality, someone must put his or her neck on the line. Vision requires visionaries, people who have allowed their minds and hearts to wander outside the artificial boundaries imposed by the world as it is. A vision requires an individual who has the courage to act on an idea.”

“Truth be told, the most inspired, motivated, and driven people I know are the ones who live their lives from the energy of their holy discontent. They have a constant awareness that what is wrecking them is wrecking the heart of God. Refusing to stay fed up, though, they instead get fueled by their restless longing for the better-day realities God says are coming soon. … This energy causes you to act on the dissatisfaction that’s been brewing deep within your soul and compels you to say yes to joining forces with God so that the darkness and depravity around you get pushed back. This supernatural supply of energy allows you to move forward past all the natural human-nature responses and enter instead into a life viewed from God’s point of view. In other words, your perspective shifts from that which your eyes can see to that which God tells you is true.”

Surely one of the greatest needs in our homes and churches today is for those who have never had a vision from above to beg God for one, and for those who once had a vision that burned deeply within their hearts, but something has quenched it, to beg God to rekindle the vision once again!

In other words, if we never had a vision, or if we had one, and have lost it, it might be time for us to get serious with God, get in our prayer closet, get on our knees, get in the Book, and beg God to rekindle the vision!

One thought on “Rekindling the Vision”